Hey ! What’s this ? Two blog entries in as many days ! What’s happening ?!

Well, I just wanted to tell you about my very dear friends Jackie and Mark. You may have seen Jackie on Calendar News last night talking about the lack of support for carers, or you may have heard her on Radio Leeds last week talking about the terrible condition, Huntington’s Disease.

This disease has already taken Jackie’s grandfather, mother and uncle. and now her brother Mark is suffering from the same hereditary neuro-degenerative condition. If one parent carries the gene then any child has a 50:50 chance of inheriting the disease.

Jackie has made a video (details at the end of this blog) making people aware of the condition and likening the hereditary element to the toss of a coin – Mark lost the toss. Jackie still doesn’t know whether she will win or lose the toss, but either way, her life is affected every minute of every day in caring for her brother.

I have known the family for a long time, and I have seen how much HD has affected several generations of this lovely family. I just help out one day a week, which is just a drop in the ocean.

Prior to Mark’s illness Jackie was an English lecturer, but now just gets £64 a week for being a ‘carer’. If Mark was in a specialist home it would cost £2000 a week.

Mark himself is the loveliest, kindest, cleverest of people. He has degrees in English and history and was studying for a third degree in politics when the disease first became evident. We have some very in depth discussions about politics, Greek history and heavy metal music – all of which he is expert in – and I always come home having learned something !

The reason I have put all this on my blog is because I so admire my friends Mark, Jackie and her partner Tony.

If you get chance, go on the HDA (Huntington’s Disease Association) website hda.org.uk , or their Facebook page and have a look at Jackie’s ‘Give A Toss’ video. Jackie is hoping people will take part in her challenge and post a video or selfie on Facebook or Twitter. She has persuaded lots of people to do this, including Tony Hadley !

Thanks for reading this, Annie x 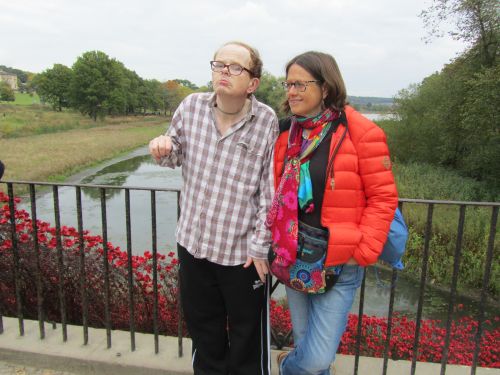